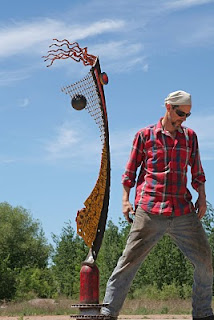 Gordon E. Gearhart is an artist-blacksmith living and working in Marquette, Michigan. With a background in sheet metal and foundry work as well as basic blacksmithing skills, he pursued a degree in Industrial Technology at Northern Michigan University in Marquette, Michigan. While attending NMU, Gordon enrolled in a blacksmithing course in the Department of Art and Design. From that point on, using iron and steel to explore sculptural and functional forms became the focus of study. Blacksmithing became the main means of working the materials of choice. After studying blacksmithing and sculpture under the direction of Art Professor Dale Wedig at NMU, Gordon began his business producing architectural, sculptural, and utilitarian metalwork.  His work took him across the country including Leadville, Colorado and Jacksonville, Florida before returning to Marquette in 1997 to open his studio. 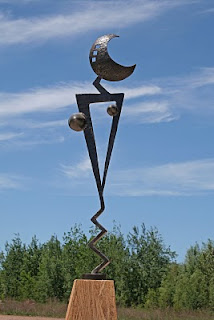 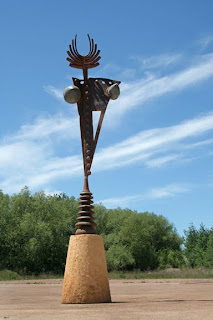 Posted by Cycling Salamander at 6:23 PM

August/Sept 2019
The gallery will be open by appointment or chance.
Stop and see us when the flag is out and the sign is up.
To check our hours or make an appointment call/text:
231.838.6460
We can often respond faster to texts than to calls.

Write and share photographs of your visit to Cycling Salamander online!

Charlevoix Attractions and Links (my recommendations)