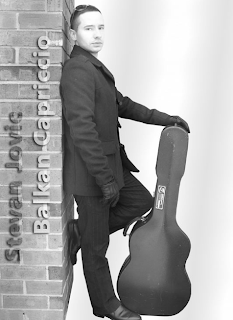 The Cycling Salamander hosts a recital by classical guitarist, Stevan Jovic Sunday, June 30th from 2-3pm prior to the opening reception for the show, "Pieces."

Stevan Jović is an award-winning classical guitarist who is currently teaching classical guitar at Interlochen Center for the Arts.  Born in the small town of Šabac in the hills of the Balkans in Serbia, Jović began playing classical guitar at age eight.  In 2011 he completed his Master of Music Degree in Guitar performance from Indiana University.  Stevan’s performing career includes hundreds of performances at festivals and exhibitions.  His musical interests and repertoire vary from early to contemporary classical guitar pieces. Learn more about Stevan at http://stevanjovic.com/.

The concert is free but seating is limited.  Reserve a seat calling 231-838-6460 or email cyclingsal@gmail.com

Posted by Cycling Salamander at 2:39 PM

August/Sept 2019
The gallery will be open by appointment or chance.
Stop and see us when the flag is out and the sign is up.
To check our hours or make an appointment call/text:
231.838.6460
We can often respond faster to texts than to calls.

Write and share photographs of your visit to Cycling Salamander online!

Charlevoix Attractions and Links (my recommendations)